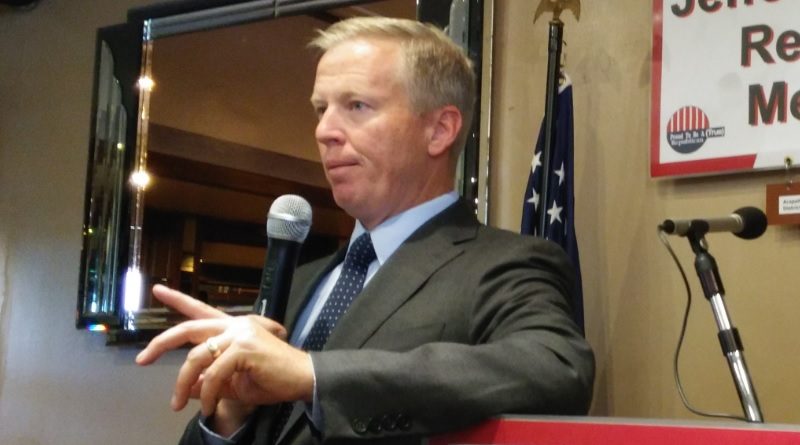 It was a fascinating talk.

He works in the second largest district out of twenty-two. He prosecuted the Aurora shooting massacre. They tried for the death penalty but lost.

Human trafficking is an increasing concern. And although he did not mention it, I understand it is often related to drug runs as well.

Speaking of such, marijuana has not delivered on its promises. Lots of money, improved schools and less crime have not come to pass. Instead there is more crime since people are ending up with more pot grown than they can use, they sell it out the back door (which is illegal).

There are bigger drug busts than before. And there has been no excess income and certainly not any advantage for the schools. (A similar story was told by the State Attorney as well in a prior meeting).

The way judges and district attorneys are legally and politically handled is a problem. The problem is that people (you know who they are) are pushing for more prosecutorial discretion for…judges.

But the criminal court judges are appointed by the governor (Colorado has only had one Republican governor in the last fifty years) and Hickenlooper likes to pick those without criminal law training (as only a brain-dead Progressive would).

Furthermore, judges are held in office unless voted out (only 3 have in the last several decades). And keep retention on a simple majority vote of the people (most of whom do not know their judges–Jefferson County district has almost two dozens various judges). Otherwise they they stay a judge until they are 72.

Oh, and the Colorado judicial branch is not beholden to the open records act like….say the District Attorneys.

Who are held to a two year limit of term (eight years). And have to be voted in (not retained). And since this office has greater accountability, George reasoned that the current level of prosecutorial discretion for DAs is sufficient and should not be handed over to a branch of government that has less oversight and transparency.

He also gave illustrations of the Feds constant desire to meddle into local law-enforcement affairs. It is bad enough, he reminded the audience, that the Feds have their finger on 1 in three inches of Colorado land and over half of the West as a whole.

That compared to five percent for the rest of the Free States of this dying Republic.

Lastly, as a self-avowed man of faith, he gave four proofs of Providential intervention of the Aurora massacre.

He sounded like a good guy. He is currently a Lt. Colonel in the Army National Guard. And this Fall is his last round as a DA if the people of Eastern Denver and Colorado vote for him.

And if you are able to vote, remember he’s the only DA who asked to have his pay cut. Most DA’s around the metro area get north of 150,000 a year!