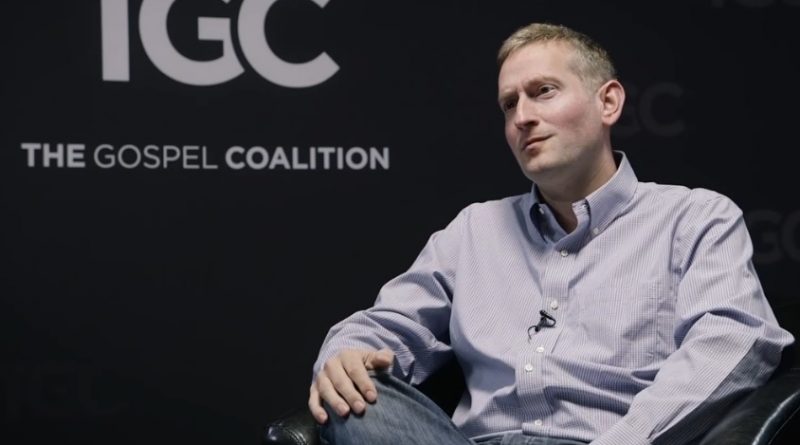 The promotion of Sam Allberry by The Gospel Coalition (TGC) is disconcerting.

It is disconcerting because of what Allbery teaches. And an investigation into those public teachings in turn brings up an important question about TGC’s promotion of this man: does The Gospel Coalition believe in the heinousness of homosexuality?

Allberry’s book, Is God Anti-Gay, was published in 2013. The book was warmly reviewed at TGC’s website and promoted far and wide with glowing endorsements from other respectable Reformed leaders. Allberry is an editor at TCG. Meanwhile, Allberry’s speaking engagements spread and his 2017 video clip came across my facebook feed:

“I am same-sex attracted and have been my entire life. By that I mean that I have sexual, romantic and deep emotional attractions to people of the same sex. I choose to describe myself this way because sexuality is not a matter of identity for me, and that has become good news.”

Such a detailed admission is shocking. I decided to investigate the backstory of the aforementioned video. Allberry, a minister in the Anglican church, signed a public letter, in conjunction with several other pastors, to the College and House of Bishops with respect to the issue he addressed in the 2017 video clip:

“We are committed to building a church that is genuinely welcoming to all people, irrespective of the pattern of sexual attraction which they experience. We would welcome initiatives to help local churches do so in a way that is affirming of and consistent with Scripture and would hope to support suggestions you might wish to bring to Synod to that effect.”

To that end they urged the Bishops not to contradict the “Issues in Human Sexuality” and the Lambeth Resolution 1.10. That resolution declares the same goal:

“We call upon the Church and all its members to work to end any discrimination on the basis of sexual orientation, and to oppose homophobia.”

The resolution gives further explanation of their (and Allberry’s) views on sexuality:

“Those who understand themselves as homosexuals, no more and no less than those who do not, are liable to false understandings based on personal or family histories, emotional dispositions, social settings and solidarities formed by common experiences or ambitions. Our sexual affections can no more define who we are than our class race or nationality. At the deepest ontological level, therefore, there is no such thing as ‘a’ homosexual or ‘a’ hetrosexual; therefore there are human beings, male and female, called to redeemed humainty [sic] in Christ, endowed with a complex variety of emotional potentialities and threatened by a complex variety of forms of alienation.”

So Adam and Eve were not heterosexual? How were they to fulfill the creation mandate? Were they just abstract human beings without sexual identity? Is heterosexuality merely a fiction created to procreate for otherwise asexual humans? What do these words even mean?

If the affections and activities of sexuality are not part of the human make up, then is homosexual attraction even a sin?

In making a safe space for celibate homosexual-attracted people, the resolution has cut the throat of sexual godliness.

The Lambeth Resolution 1.10 is endorsed by the three founding members of Living Out, an organization designed to help Christians who struggle with homosexuality. Allberry is one of those founders.

Living Out is promoted by TCG. Two of the three founders are writers at TCG (Allberry and Ed Shaw). And those founders’ books are favorably reviewed by TGC.

Living Out’s stated goal is “[to help] to build more biblically faithful and compassionate churches where all are encouraged to be more Christ-like regardless of their sexuality and where homophobia is not tolerated.”

But that is not the only goal of Living Out:

“To help the wider world hear and understand that there is more than just one viable script for those who are same-sex attracted. So we’ve shared our stories at public events, on-line and via the media to communicate that many same-sex attracted Christians are both happy with their sexuality and the bible’s teaching on same-sex sexual relationships.”

Let me quote that again: “that many same-sex attracted Christians are both happy with their sexuality and the bible’s teaching on same-sex sexual relationships.” [italics original; see footnote]

Is this a typo? A misstatement? Maybe happy means satisfied or acceptable. Surely they do not mean what they wrote.

But who would use the word happy to describe someone who struggles with child-attraction? Has the social normalization of homosexuality dulled our discernment? Has our theology morphed to blend in with our pagan environment?

Given the desensitizing of Christians to the sexual sins of our age, I must highlight how astounding Allberry’s claim is. Just replace “same-sex attraction” with “child attraction” or “animal attraction.” Remember, by “attraction” Allberry means “sexual, romantic and deep emotional attractions.”

Would the typical Christian shrug their shoulders over such claims? Of course same-sex attraction is a sin! It is forbidden by God’s Word as much as child attraction or animal attraction. James 1:14 warns us that such temptation arises because the sinful attraction is already in our flesh—the flesh which theologians dub original sin.

This apparent downplaying of the culpability of inherent corruption (Romans 7:14ff.) is a key problem for this organization. And it explains a number of otherwise troubling assertions I discovered.

Consider the following from “How Should I Respond if My Child Comes Out to Me”:

“the assumption that being ‘straight’ is the normal sexuality which they are deviating from – whereas, as I have just pointed out, ‘straight’ sexuality is equally fallen from God’s good original created purposes.”

“They are still themselves. Whilst their sexuality is an important part of them that you must accept and not deny, it is not the whole of who they are.”

Having homosexual desires is “an important part of them” and you, dear reader, must accept that. This makes sense if so-called same-sex attraction is not a sin. And it makes sense when there is no call of repentance.

Consider also the assertions from “Does Living Out Support Gay ‘Cure’ or ‘Conversion Therapy’?“:

“Our belief is that all of us have fallen sexual desires (whether heterosexual or homosexual), and that what we need isn’t more heterosexuality or less homosexuality, but the holiness found in Jesus Christ.”

The author claims that the holiness of God precludes heterosexuality. Why not both? The baseline for sexual attraction, affection and action is not heterosexuality according to Living Out. This is astounding!

Equally astounding is the rationale offered: “We believe it is essential to help people accept themselves as they are, just as God accepts us as we are.” How is this reasoning different than any other liberal argument in the last fifty years? Christians should not accept the sin that readily abides in them. That is the whole point of Romans 7.

Lastly, Allberry recently tweeted a strange sentiment: “Scripture has a theology of marriage, not of homosexuality.”

Given the evidence thus far, such a view makes more sense. Another Living Out article (“Why Not Say You are Gay”) may flesh out the thought behind the Allberry quote:

“The Bible knows nothing of the concept of ‘sexual orientation’ – so no-one is ever referred to in the Bible as being gay, lesbian, straight, or bisexual. God’s word speaks only of sexual practices, i.e., those which are pleasing to God (sex within marriage, which is between one man and one woman) and those which are not (all other sex, whatever the context).”

The Bible speaks only of sexual practices? What about sexual thoughts? Or sexual attraction? Is Proverbs no longer part of their bible?

Any one of these quotes is enough for a second read. Collected together they spell warning. Taken with Allberry’s outright denial of the culpability of homosexual attraction—that spells trouble.

Can anything written by Living Out authors be taken as conservatively biblical?

[FOOTNOTE: it recently came to my attention that Living Out changed this statement by one word. They replaced the preposition with. It now reads “Christians are both happy in their sexuality and the bible’s teaching…” Nothing is materially affected by this change].

36 thoughts on “Does The Gospel Coalition Believe in the Heinousness of Homosexuality?”