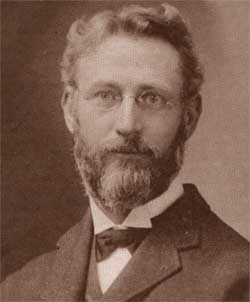 (Part 4 of a five part series)

My three-part series on Christ-centered or “Gospel preaching” (sermons that always have an explicit message of Christ as “integral,” the “climax”, and the last thought for the audience) is far from complete.

Trueman, Kaiser and Vos were not included.

Yes, Geerhardus Vos, whose biblical theological method is the bedrock for much Reformed Christocentric preaching these days, preached non-Christocentric sermons. At least three, at any rate. I have not read all his sermons, but it only takes a few counter-examples to prove that Vos was not the father of modern Christ-centered preaching.

In his sermon on Hebrews 11:9-10, “Heavenly Mindedness,” Christ was mentioned a few times but never as “integral” to the sermon. And the last thought and climax of the sermon was about God being our God and we being his people.

The sixteenth sermon exposits Isaiah 57:15, “Our Holy and Glorious God.” There is nary a word of “Jesus Christ.” Salvation and grace play backseat to the holiness and infinite majesty of God.

The “Suffering Servant” is mentioned in passing. And the listener leaves the sermon in awe of God’s glory. Christ is neither the climax nor the last thought on the hearers mind. How many redemptive-historic preachers of today could follow Vos?

A sermon on Psalm 25:14, “Songs from the Soul,” mentions Christ twice. At the beginning, Vos briefly notes Christ’s relation to the Psalm. But the remainder of the sermon is about the devotional life of believers.  But he does end the sermon with a lasting thought upon Christ:

“Let us endeavour to cultivate diligently the devotional spirit of the psalmists. Or, better still, let us take for our example the spirit of Jesus himself…”

This is a major violation of so-called Gospel preaching. To end a sermon on a moral exhortation is verboden, undermining the message of redemptive-history.

Ironically, this volume of sermons (Banner of Truth,1994) was praised by Kerux editors as “a feast of Christ-centered and God-centered preaching.” Apparently, if Vos preached non-Christ-centered sermons, it’s OK.

A few years back, Dr. Kaiser wrote a short essay about Christ-centered preaching. Later, he engaged with other writers on this topic. In 2014 he wrote another series, subtitled, “Is Jesus really found in EVERY Old Testament text?”

“Much of Christocentric preaching tended to depend on a strong Biblical Theology, but a Biblical Theology that often wove together somewhat selectively somewhere around some twenty major biblical themes such as kingdom, temple, sacrifice, covenant, and the like; but it was one in which it allowed the preacher to leap, from anywhere in the older Biblical text, to a call for the listener to trust in the Lord Jesus, who was the author of so great a salvation, and who died, was buried and rose again. In the meantime the original pericope chosen as the text to be preached on lay unattended and underappreciated (if not totally untaught) by the teacher or preacher who had announced it as the text being exegeted.”

Lastly, we come to the intrepid Trueman. In a little-known essay, he expressed reservations about the newly-dominate Biblical-theological preaching as represented by Goldsworthy. I will quote it in full.

“Biblical theology is – or rather, was – a necessary corrective to fanciful pietistic exegesis and mindless doctrinalism – but anyone who thinks that these are still the major problems in evangelical churches clearly inhabits a different world to the one of which I have experience.  In most churches where preaching still holds a central place, I suspect that an overemphasis on doctrine and systematic theology is not the problem.

“After all, how many of us go to churches where the Trinitarian nature of God, while upheld in our doctrinal statements, is sidelined in preaching and worship to the point where most of us are functional Unitarians.  In my experience as a teacher, it is a lack of knowledge of, say, the doctrine of the Trinity rather than puzzlement over how to preach a Christian sermon on David and Goliath which is today the most pressing problem.”

“My fear is that the biblical theology movement, while striving to place the Word back at the centre of the church’s life, is inadequate in and by itself for the theological task of defending and articulating the faith.  Reflection upon the wider church tradition is needed, creeds, confessions and all, because this is the best way to understand how and where the discipline of biblical theology and redemptive history can be of use to the wider picture without it usurping and excluding other, equally necessary and important theological disciplines…

“The biblical theological revolutionaries have become the new establishment, it is time for those of us rebels who think that the Bible raises more than just redemptive-historical questions, and that the creedal tradition of the church gives important insights on this, to raise our voices in dissent, to highlight the very real dangers of making this insight into an ideology and to do our best to bring the pendulum back a little.”

And so I raise my voice in dissent, hoping more preachers and professors will do the same.