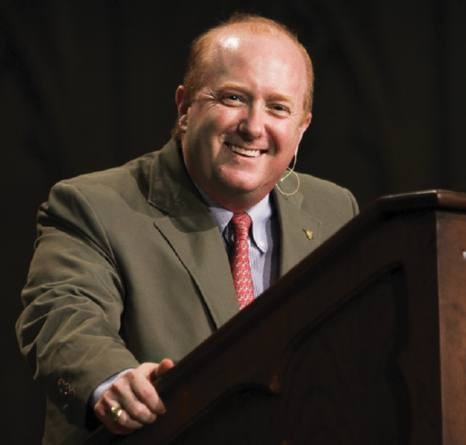 With the recent public confession of sin by pastor R. C. Sproul Jr., it seems appropriate to discover more about him and his public ministry.  What kind of influence does he have? What does he believe? Where did he come from?

His influence is in conservative Christian circles. He is a writer and teacher at Ligonier Ministries.  And he has two blogs (his own and the Ligonier one). His influence appears to mostly be in homeschooling circles through  conferences. And with the help of the National Center for Family Integrated Churches (NCFIC), where he was a speaker at their first conference, his influence has grown.

Much of what he writes is uncontroversial; much of what he believes is straight teaching (orthodox); much of how he writes (especially the last few years) is more moderate. But he also has some interesting views.

For instance, he espouses paedocommunion. And he helped write the Tenants of Biblical Patriarchy. And he has spoken at various family economic conferences.

I first heard of him at a Christian Home Educators of Colorado (CHEC) conference back in 2006. Among the good things he said, one comment stuck out like a sore thumb:

I think he meant something better than what he said. But I do not know.

More significantly, at that 2006 conference he asserted that the bible teaches “family integrated churches.” At the time I was just getting my head wrapped around that nebulous concept. By 2011 it was clear what that term meant and where Sproul stood on the issue (especially since he is in the NCFIC movie, Divided):

“[Sunday schools] were designed not to teach the faith to the children of the covenant, but as an outreach to the lost and undereducated. Sunday Schools began as combination of mercy ministry and evangelism. It wasn’t intended for us. These well-meaning folks didn’t listen to the regulative police, and now we have youth leaders with purple hair eating worms for the kingdom. Worse, our fathers have become as weak and shiftless as the fathers of those little urchins of a century ago.”

But Sproul Jr. was not foaming-at-the-mouth mad about this movement. He warned readers away from emphasizing age-integration over more important matters: “The octogenarian Sunday School teacher isn’t the devil’s handmaiden.”

Even though he seems moderate on this issue, he is so tied to this model that a common-sense woman’s or men’s meeting (taken straight from Titus 2!) makes him uncomfortable—after all, it separates the family members from each other:

“I would certainly want to be careful about this [men’s and women’s meetings], though I would agree that there might be times when these kinds of meetings are fitting.”

“There is, in evangelical homeschooling circles, a growing divide. On the one side there are those of us who might be called movement homeschoolers. We homeschool because we believe it to be the Biblical choice, not because we merely prefer it. We tend to adopt many of the secondary lifestyle issues related to homeschooling, lots of children, modest dress, husbands as the heads of their homes, courtship, denim jumpers.”

Such a contrast was not made in arrogance but—more so than other past homeschooling leaders—with a tangible air of humility:

“I have failed to practice a judgment of charity. I have treated professing Christians with whom I disagree [about homeschooling] with less grace than I treat poisonous snakes.”

Yet his view on homeschooling, gracefully couched in loving terms, is still a radical homeschooling stance. In his book, When You Rise Up, he simply asserts:

It is one thing to argue for homeschooling’s superiority, it is another to give it the moral authority of God.

Where did he come from? I want to clear the air: Sproul Jr. was deposed from office back in 2006. He and his church leadership repented of their sins. Their overseeing denomination granted forgiveness and allowed them to leave peaceably (I verified this independently; see also the links offered by Wikipedia).

None of this is to say that everything that Sproul Jr. says or writes is wrong. Nor is it to say one should never listen to his suggestions, ideas or advise. This information is offered so that more conservative homeschoolers will be informed and act accordingly. May that be so.

10 thoughts on “What Christians should know about Sproul Jr.”