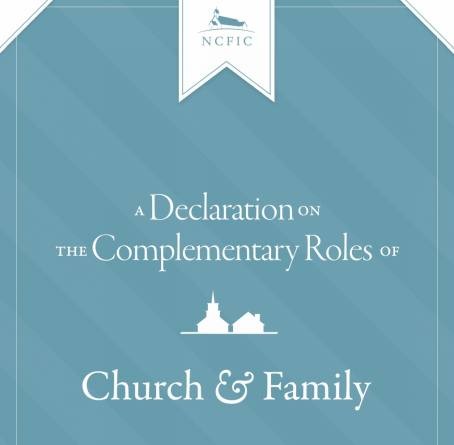 The promised new declaration of Scott Brown’s National Center for Family Integrated Churches (NCFIC) is here. But why should the average conservative Christian care?

You, dear reader, should care because the NCFIC represents the views of 689 churches in America with a declaration calling upon you and your church to repent of “unbiblical practices and traditions of men [which] contribute to the destruction of church and family life.”

Do you have Sunday school for kids? Do your young people read the bible together without their families? Do you send your children to school?

Then you have practices and traditions of men. And you should repent. And the odds are there is a family-integrated church (FIC) nearby that agrees—even in confessional denominations.

You should care because this is not a passing fad. It has been growing for almost fifteen years. And it is promoted yearly with conferences across the country. And they even made a movie about it.

And they agree so strongly with this view that these churches have publicly covenanted together to plant more family-integrated churches: “Wherefore, in Light of This Our Faith, We Do Hereby Resolve to…Plant biblically sound [family-integrated] churches…”

But there are some redeeming qualities. This new declaration still retains a high view of the Bible, the family and the church. It properly warns families and churches not to forget their roles and, now, highlights the importance of the Gospel.

It is also a kinder, gentler declaration. The offensive untruth, that youth programs per se are rooted in secular and evolutionary thought, has been omitted (but not formally renounced). Now the new version bemoans the more inclusive dangers of the “traditions of men” and “false teachings” in the church, such as Secular Humanism and Darwinism.

You should also care because this new version expresses its nascent legalism in a clearer form:

If you cannot find any clear, positive and scriptural pattern for Sunday school, then it should be rejected by your church. So says Scott and the NCFIC.

A zealous defender of the NCFIC will doubtless point to the caveat given at the end of the new NCFIC declaration: “We believe that discipleship experiences are not designed by God to be as tightly regulated compared to corporate worship.”

Since discipleship is not “as tightly regulated” then surely some age-segregated activates are allowable. Surely, your church can have its weekly one-hour of Sunday school?

But you should still care because Scott already explained that he allowed for exceptions three years ago in his flagship book, A Weed in the Church! He argued for several pages that for an otherwise healthy and mature church as “little as one hour a week” of age-segregation is “problematic” for those wishing biblical felicity:

“[It] overthrows biblical jurisdiction…if God thought that systematic, age-segregated ministry for youth were good or helpful, He would have prescribed it. We know that Deuteronomy 6 and Ephesians 6 speak clearly regarding whose job it is to teach children. God has appointed this responsibility to only one kind of person—a father” (p.229).

So the declaration’s own exception—that discipleship is not as “tightly regulated”—virtually proves to be nothing of the kind. One hour a week is too much for Scott Brown and the NCFIC.

You ought to care, dear reader, because this document is merely receiving a facelift. This is a renewed effort to make their unbiblical view more palatable.  They have even resorted to paying “regional facilitators” to promote their view. That new family camp in your area may just be a guise for NCFIC propaganda.

You should care because Scott Brown is rabidly against any and all things age- or family-segregated. And he is calling the shots at the NCFIC.

Scott believes “age-segregated youth ministry is the result of apostasy in the church” (A Weed it the Church, 43). He believes that adding or subtracting to what the bible states about youth discipleship (ways, means, manner, etc.) is sin. He believes that such practices as catechizing the youth (as Calvin did in Geneva) is a “serious matter,” a “serious error.” He believes the Scottish Sunday schools of the 1600s and the New England Puritan gathering of youth without parents to be “a heinous crime…committed against God’s order for the church and the family. God never intended for children to be trained by Sunday school teachers. He specifically gave this responsibility to fathers.”

Yet I think one more quote is in order for those who still have doubts:

“…we are systematically sending our young people on the path of destruction. It is fracturing our families. It is corrupting our churches. It is destroying the next generation.”

So, the new declaration of the NCFIC has changed nothing, notwithstanding it kinder, gentler language.

You, dear reader, should care about this new declaration because it is subtly written to retain all its original radicalness while sounding attractive. It is a well-organized movement determined to create new churches in its own image. It is a public call for your church to follow the innovative regulative principle of discipleship.

It is aimed at reforming the family contrary to the history of the church and the freedom found in Christ. And that is why you should care.