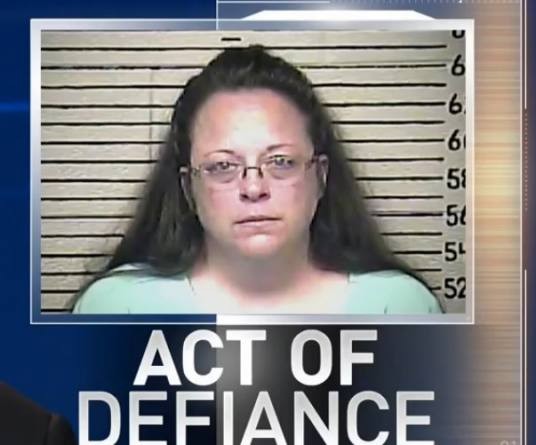 Fox News gave a nice summary of the GOP presidential runners. Naturally, the majority are clearly, some even forcefully, in defense of Davis’ decision: Huckabee , Cruz, Santorum, Paul, and Jindal

A few of the candidates seem a little more cautious:

Rubio: “While the clerk’s office has a governmental duty to carry out the law, there should be a way to protect the religious freedom and conscience rights of individuals working in the office”

Christie (the man who outlawed Christian homosexual therapy): “What I’ve said before is for someone who works in the government has a bit of a different obligation than someone who’s in the private sector or obviously working for education institutions that’s religiously based or others,” he said, adding, “but my point is we have to protect religious liberty and people’s ability to be able to practice their religion freely and openly, and of course we have to enforce the law too.”

One, Bush, simply asserted: “she is sworn to uphold the law.”

One gave an answer that seem to support a government-trumps-rights approach to religious freedom:

At this stage in the devolution of the American Republic it seems that Christian politicians should make a clear stand. We have already seen that when an inch is given a foot is taken. It is not the time to be mealy-mouth even as it is the time to be wise as serpents.