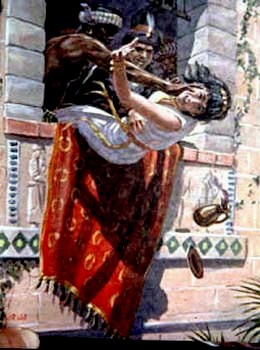 [From my fellow pastor and friend, Jason Wallace]

Jezebel is (politically) dead. Her war on Christ’s church is apparently over. For many, Donald Trump is our Jehu, a political savior who may very well bring destruction on the temple of Baal. I thank God that Hillary Clinton is not our president, but my fear is that Trump’s election may be like Jehu’s victory over Jezebel. Israel celebrated their deliverance, but they never really turned back to God. They repudiated Baal, but they continued their idolatry at Dan and Bethel. Rather than bringing real change, Jehu ultimately became just one more ungodly king who helped Israel to her destruction.

We should rejoice at what happened yesterday, but we need to recognize that, except for the Electoral College, Hillary would be our president. More people voted for Hillary than Trump, despite her being in open war with Christ and His church. Ungodly rulers are a judgment from God. We are all aware of Trump’s own issues, so we should pray that God will show mercy on him and turn his heart to Him, but even if God does, Trump is not the answer to our problems.

The reality is that, despite watering down and sweetening up Christianity, it has not become more popular in our country, but less. I believe that unless we use the next few years to reform Christ’s church according to the Bible, in other words return to historic Protestantism, and seek real revival, this will only be remembered as a brief respite in our ultimate destruction as a nation.

Let’s look at the state of the church in America. Most of what calls itself Protestant today is as Gnostic as Roman Catholicism. The mainline denominations seem to be in a race to see who can most quickly transform themselves into a Canaanite fertility cult. A dozen years ago, the Episcopal Church (ECUSA) website offered an alternative communion service: instead of a Lord’s Supper of bread and wine, you could offer raisin cakes to the Queen of Heaven. A Lutheran (ELCA) congregation in San Francisco has a giant banner offering “Goddess Worship Here” and teaches women to make idols of Asherah.

Evangelicalism is not much better; it’s basically the old Liberalism with a praise band. The old Protestant message of salvation by grace alone through faith alone has been transformed into a Gnostic “easy-believism.” Once you learn the secret phrase, “Jesus died for me,” you supposedly get entrance into heaven. Repentance, regeneration, a new heart, and the indwelling of the Holy Spirit are either ignored or seen to be adding works to grace. The great danger Evangelicals see is “legalism,” or as the Protestants called it, “a diligent use of the means of grace.” The only sins Evangelicals seem to get very upset about are other peoples’. The Protestants knew that a love of God drove out the love of the world, but Evangelicals tend to pride themselves on how worldly they can be. It supposedly shows the greatness of grace and their desire to be relevant.

A large number of Evangelicals have given up on a visible church. If they attend any gathering, it’s a night club/praise service with a name that sounds more like a theme park than a church. Even the more traditional churches are overrun with Gnosticism. How many still have membership? How many see church discipline as an expression of love commanded by Jesus? How many preach the whole counsel of God, including the scary parts? The “young, restless and reformed” crowd may flirt with aspects of the Reformation, but overwhelmingly they are anarchists when it comes to ecclesiology. Other than reading a few books, they don’t seem to fathom that the Reformation was about more than beer and beards.

Evangelicals are finding it hard to stand against the acceptance of homosexuality. They have reduced Protestantism to a “personal relationship” with Jesus, that they get to define. Historic Protestants stood for Sola Scriptura, but modern Evangelicals stand for “Solus Spiritus.” The Bible only matters if it fits their personal preferences; in everything else, the “Spirit” is speaking. If the Bible doesn’t really matter on the grounds for divorce and for ordaining women, why should it matter on homosexuality?

Fundamentalists think they are immune from such compromise, but most are just as Gnostic without seeing it. Rather than seeking to return to historic Protestantism, they reject it as anti-Semitic. Their dispensationalism means Christians are no longer children of Abraham (Galatians 3) or the Israel of God (Galatians 6), we are “Plan B,” a church age that must fail and have a remnant raptured away. Instead of the wheat and the tares growing up together, the tares choke out the wheat.

It’s considered “replacement theology” to say that we’ve been grafted onto the same olive tree (Romans 11) and that we are the true circumcision (Philippians 1). If we seek to be salt and light, Dispensationalists argue that we’re polishing the brass on a sinking ship, because the Laodicean church age has begun. Instead of making disciples and teaching them to observe ALL THINGS Christ has commanded, they seek to simply get people to mouth the sinner’s prayer before the (always) immanent rapture. Rather than seeking to redeem the time, most are probably trying to figure out how Donald Trump fits into their end-times chart.

So here we are; Big Sister is not watching us, for now. The Ministry of Love (renamed the Anti-bullying division of the Civil Rights Commission) is not coming for us, yet. What do we do now? Most churches will continue entertaining people and helping them feel upset at other people’s sins, but comfortable in their own.

What will we do? By God’s grace, we will speak the whole truth in love. We will recognize that America is not Israel, but the church is and always has been (Acts 7:38). The only hope for Jews is being grafted back into the olive tree through faith in Christ. The only hope we have is abiding in Christ, because if God did not spare the natural branches, He will not spare us in our unbelief.

We will seek to be salt and light and do the hard work, so that when Jesus comes back, He will find us doing what He told us. We won’t satisfy ourselves with an abstract relationship with Jesus, but one rooted in His own revelation about Himself. In other words, we’ll be Protestants – – Christians as defined by God in His Word. We won’t await yet another Jezebel before we go back to our knees, back to God’s Word, and back into fellowship with His people. Will you join us?

One thought on “Jehu’s America”