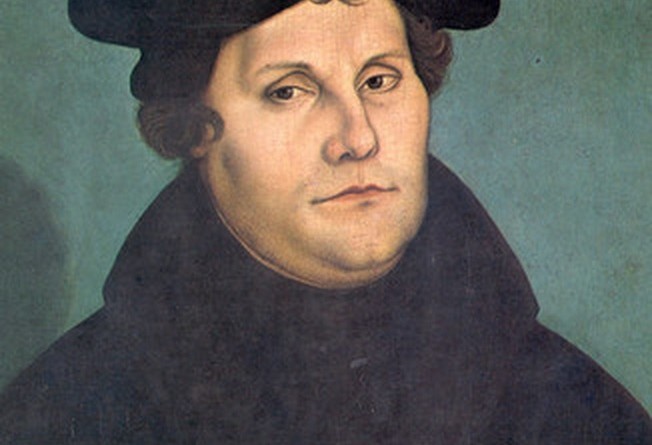 [Republished from my original 2011 Examiner.com series]

On October 31, 1517, the eve of All Saints’ Day, an Augustinian monk, hammered 95 theses—short propositions—on the Wittenberg door in Germany. He was protesting the indulgences of Tetzel, who purportedly announced: “As soon as the coin in the coffer rings, the soul from purgatory springs.” This system of indulgences was part of the larger system of baptism and penance and the Mass. Each a step in the works-salvation method of Rome. If a shrewd Christian could find the right confessor and some money, he could cover most sins while living like the Devil. In fact, even civil punishment could be avoided this way.

Hammering the theses was a public declaration. An advertisement of sorts. But it was more. It was a formal declaration against the Papal and Romish supremacy in matters of faith and life. The various theses fundamentally attacked the Romian church’s authority over the matter of salvation. It dismantled the churchly machine of Sacerdotalism—that mechanical view of redemption integrated into the church. It was claimed that salvation was found only in the Roman church through the Roman priests and the Roman sacraments. Good works were instrumentally necessary for salvation. In short, it was a works-salvation system. And although Christ was formally part of the process, He was not part and parcel to the entire schema.

In contrast, Luther wrote: “Every truly repentant Christian has a right to full remission of penalty and guilt, even without letters of pardon.” (Thesis 36). That is, Christians can have full remission of sin without Romish interference (“letters of pardon”). The believer had direct access to God. He needed no other mediator than Christ. Historian and professor of Princeton, Warfield, explains the antithesis thusly:

“The fundamental difference between the two doctrines [Luther and Tetzel] is the fundamental difference between evangelicalism and sacerdotalism. Evangelicalism casts man back on God and God only; the faith that it asks of him is faith in God’s saving grace in Christ alone. Sacerdotalism throws him into the hands of the Church and asks him to put his confidence in it—or, in the indulgences, very specifically the Pope.”

This view was summarized by Luther: justification through faith alone by grace alone on account of Christ alone. It was a view that was earlier discovered by Luther’s study of the book of Romans (about 1515 AD). And it is the view underlining the 95 Theses:

“What he here attacks is just the sacerdotal principle in one of its most portentous embodiments—the teaching that men are to look to the Church as the institute of salvation for all their souls’ welfare, and to derive from the Church all their confidence in life and in death. What he sets over against this sacerdotalism is the evangelical principle that man is dependent for his salvation on God and on God alone—on God directly, apart from all human intermediation—and is to look to God for and to derive from God immediately all that makes for his soul’s welfare.”

Luther’s casting of the issue into the public limelight made October 31 the birthday of the Reformation. And made it the beginning of cultural renewal of the West.

In the articles to follow, the tremendous impact of Reformation theology will be presented. It was not the only source of influence, but it was of great significance in the economics, science and politics of yesteryear and the roots of modern prosperity. Of course, history is not accomplished in a vacuum. The Reformers always insisted that they were only following doctrines already existing in the church but not fully understood or consistently carried out. What I hope to accomplish is a greater appreciation of the results of the Reformation; results, to be sure, that were not necessarily consciously pursued—a not uncommon activity among humans—but logically flowed from the biblical ideals of Luther, Calvin, Knox, and their fellow Reformers.

[Check back for more articles in this series]