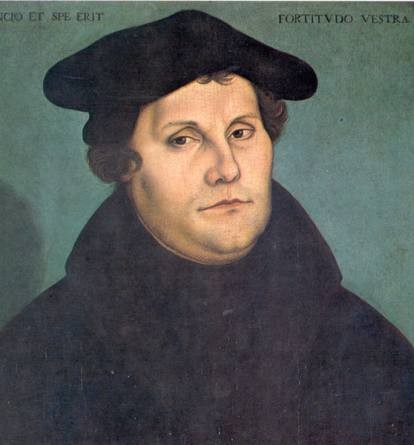 What do ghosts and goblins have in common with Luther and Calvin? Both are celebrated on October 31st. Yet only one group had historical significance.

George Bancroft, founder of Annapolis Academy and one of the first American historians, asserted, “He that will not honor the memory, and respect the influence of Calvin, knows but little of the origin of American liberty.”

Historically, conscience-anguished Martin Luther found peace through faith in the person and work of Christ. Having nailed the 95 Theses to the church door at Wittenberg on October 31st, he blazed a path which John Calvin followed and expanded. Calvin’s theological system encompassed all of life, and his world view was carried to the new world: the French Huguenots of the Southern colonies, the Dutch colonists of Manhattan and the English Puritans of New England. Three key foundation-stones of early American culture were laid by the ideas of Calvin and others: church liberty, universal education and the right to resistance. Let the historians speak for themselves.

Yale historian George Fisher wrote: “How is it, then, that Calvinism is acknowledged, even by foes, to have promoted powerfully the cause of civil liberty? The reason lies in the boundary line which it drew between church and State. Calvinism would not surrender the peculiar notions of the Church to the civil authority. Whether the church, or the Government, should regulate the administration of the Sacrament, and admit or reject the communicants, was the question which Calvin fought out with the authorities at Geneva…” This idea was institutionalized in the Puritans of the Presbyterian Church and Congregationalist settlers on the shores of America.

Dedication to education was the hallmark of the Reformers and the settlers in America. A mixture of local schooling initiatives and laisser-faire education formed the basis of American education. Historian Bancroft again asserts: “We boast of our common schools; Calvin was the father of popular education, the inventor of the system of free schools.”

The right to resist unlawful government was furthered by the Reformers. Dave Kopel (of the Independence Institute) wrote in Liberty magazine, October 2008, “The [REFORMED]Congregationalist and Presbyterian ministers played an indispensible role in inciting the American Revolution.” The great statesman John Adams bluntly acknowledged the widespread influences of both the 16th-century French-Calvinist’s work Vindicus Contra Tyrannus and the English Calvinist work of Ponet (A Shorte Treatise of Politike Power); both books defended the right of the people to rise against tyrants. Modern historians such as Daniel Elazar (of Temple University) have made similar claims: “In all of the places where Reformed Protestantism was strong, there emerged a Protestant republicanism that opposed tyrants even as it demanded local religious conformity.”

In fact, most of the early American culture was Reformed or tied strongly to it (just read the New England Primer). Von Kuehnelt-Leddihn, a Roman Catholic intellectual and National Review contributor, asserts: “If we call the American statesmen of the late eighteenth century the Founding Fathers of the United States, then the Pilgrims and Puritans were the grandfathers and Calvin the great-grandfather…”

“So what?” you ask. Well, if we are to avoid the errors of the past, are we not also to learn from the victories of history? The least we can do is understand what the Reformation was all about and what elements were so vital to the formation of America. And perhaps, just maybe, America can be renewed to her former glory.