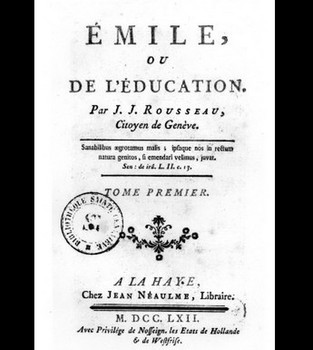 Conservatives do not like Rousseau. And homeschooling conservatives less so. In fact, a recent book,Apostate, listed him along side other historical figures as a source of apostasy in the West: the grandfather of statist education, bent on destroying the family.

Certainly in on sense that may be true: insofar as any and all beliefs not founded upon truth will be harmful. Yet people are more complex than we imagine at times.

For example, consider these quotes:

“But when mothers deign to nurse their own children, then morals will reform themselves, natural feeling will revive in every heart, the state will be repopulated.”

“There is no more charming picture than that of family life…”

These are not just polite dinner platitudes but heartfelt expressions:

“But what does this rich man do, this father who is so full of business, and compelled, as he says, to abandon his children? He pays another man to discharge those duties which are binding on himself. Venal soul! do you expect with your money to give your son another father? Be not deceived; it is not even a master whom you give him, but a valet; and presently he will make of your son a second.”

These are the very words of Rousseau.

Does this sound like a hard-boiled statist bent on destroying the family? Rousseau wrote some about education in other works, but these quotes come straight out of a book dedicated to the topic of education, Emile (1762).

The point of Emile is to offer an idealized educational plan that would minimize social and cultural influences upon the child by cocooning him in a country estate to be raised by his family.

Emile was to be homeschooled.

But as much as Emile is an idealization, it is also practical. As the previous quote indicates, the scenario Rousseau is setting up includes what he thinks is the typical father of his time: a busy man with little time for his family. A man who pays a private tutor to teach his children.

But Rousseau is being practical. So he allows his imaginary boy, Emile, to be raised by an imaginary tutor. The tutor is to be a foster-father of sorts. In this idealization of proper education, relationships are important, especially familial relationships:

“The attractions of domestic life are the best antidote for bad morals. The noisy play of children, which one assumes to be bothersome, becomes agreeable; the mother and the father become more necessary, more dear to each other; the conjugal bonds are tightened. When the family is lively and animated domestic cares become the most cherished occupation of the wife and the sweetest amusement of the husband. Thus from this one corrected abuse would result a general reform; soon nature would have regained all of its rights. Once women become mothers again, men will become husbands and fathers.”

But don’t take my word for it. Rousseauian experts such as Boyd,Terzian and the Stanford Encyclopedia of Philosophy agree.

How? Rousseau’s point in homeschooling was to protect the innocent children from bad social influence.

He believed that children were morally innocent. And he believed bad environments and examples made them wicked:

“A young man is led astray in the first place neither by temperament nor by the senses, but by popular opinion. If we were concerned with boys brought up in boarding schools or girls in convents, I would show that this applies even to them; for the first lessons they learn from each other, the only lessons that bear fruit, are those of vice; and it is not nature that corrupts them but example ” [Book IV, emphasis added].

How many homeschoolers believe the same? How many believe that sheltering children is the answer?

“But let us leave the boarders in schools and convents to their bad morals; there is no cure for them. I am dealing only with home training. Take a young man carefully educated in his father’s country house, and examine him when he reaches Paris and makes his entrance into society; you will find him thinking clearly about honest matters, and you will find his will as wholesome as his reason. You will find scorn of vice and disgust for debauchery; his face will betray his innocent horror at the very mention of a prostitute.”

Naturally, not everyone who homeschools thinks children are morally innocent or that sin only arises from external influences. Yet there seems to be too much Rousseau in too many homeschooling families. And to the extent that such sub-Christian doctrines are believed in homeschooling circles, to that extent apostasy exists.

So, by all means, let us understand the history of apostasy in the West but let us not forget how easily apostasy may reside within our own secure borders of home and hearth.