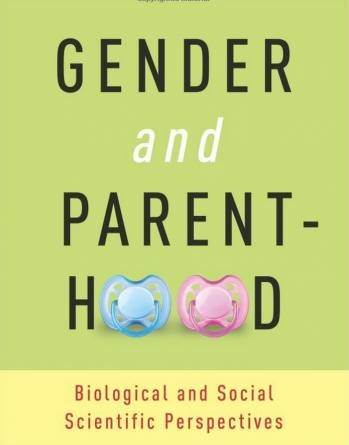 A little-known book with large implications for the Supreme Court’s decision on traditional marriage, Gender and Parenthood is an understated bombshell. The subtitle explains the breadth of the book: Biological and Social Scientific Perspectives.

Published in 2013, the book is a collection of twelve scholarly essays (with two to eight pages of references per essay). Written from a wide-spectrum of academic perspectives, the content includes evolutionary history, social science and neuroscience. The academic credentials and in-depth research of this book cannot be gainsaid.

It is by no means a casual read. But most interested parties should have no problem understanding the research and conclusions offered. And the conclusions are profound:

“Parenting is gendered and a gendered activity…even similar parenting behaviors may affect daughters and sons differently due to gender-related differences in children’s disposition…” (110).

“Mothers and fathers are not interchangeable” (80).

“The evidence is in, and it is clear that fathers do matter in the lives of their children. Literally hundreds of studies over the past two decades have consistently demonstrated that fathers have a measurable impact on children” (249).

Similarly, there are hundreds of studies that “link aspects of gendered parenting to child outcomes,” with outcomes favoring traditional parental roles. From emotional expression to social development and early cognitive growth, various factors reflect the importance of gender-differentiated parenting. Results such as less social conflicts and better psychological well-being are among the varied positive consequences of traditional parenting roles.

But the book, written by scholars for (mostly) scholars is timid in its conclusions, acknowledging that more work needs to be done, especially in the area of same-sex marriages. Yet the evidence offered definitely points to the power of traditional mother-father roles.

One chapter delved into the differing types of parenting concluding, among other things, “sons from sex-typed homes typically demonstrate higher levels of competence than sons of androgynous parents” (226).

Another author’s own study lead him to discard his earlier thesis that fathers were “fungible” (replaceable): “what these analyses clearly show us is that mothers and fathers both make vital contributions to adolescent well-being” (267).

The last chapter summarized the latest data and concerns about single-mother homes, suggesting (without a hint of irony) that the positive impact of fatherhood could be promoted by cultural and political leaders: “President Barack Obama has a compelling story to tell here, and may provide the needed leadership” (335).

The book will not single-handedly secure the conservative cause, but in a political and social world of conflict about the nature, role and importance of traditional marriage, it is a bastion of scientific insight. More useful scientific evidence can also be found at one of the editor’s organizations, National Marriage Project and on youtube. The book is a must for any pastor or laymen engaged in these issues.