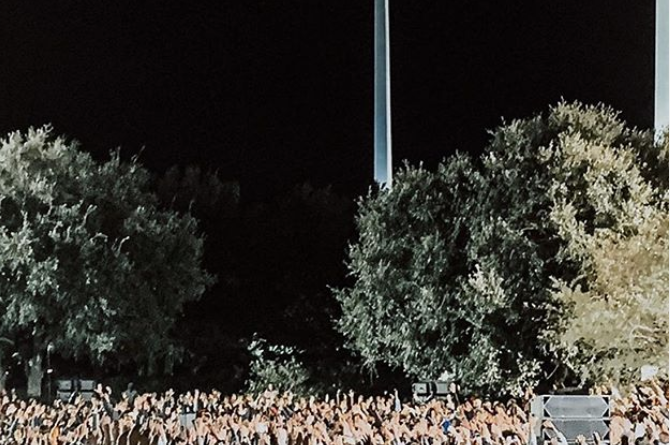 No, this is not a rant about Kanye West being a fake Christian. It is not about him being a Christian at all. It is more about facts and observations. What can be drawn from them remains to be seen.

Over the weekend it was reported that there were 1000 converts at Kanye’s worship service. This report—offered as a known fact—comes from one eye-witness:  CurvinMusic, a Student Ministries Pastor who specializes in music. On Instagram he  presented a picture of upraised hands with a large cross in the background, stating,

“In a crowd of 6,000 people from all walks of life, all ages, and all races, i witnessed over 1,000 people respond to The Gospel by raising their hands to accept Jesus as their Lord & Savior!”

Following his link to the church that hosted-but-did-not-host the event, @bethany_church, one can scroll through the photos of the event as offered by Bethany Church of Baton Rouge (at least one of its five campuses).

You can see a photo of their first of two pastors speaking (his wife is the other pastor). Interestingly, the church offered a legal disclaimer explaining that this was a nationsevent.com event. But apparently it was on or near the grounds of Bethany’s South Baton Rouge campus as indicated by the large crosses.

Browsing at high-speed through the various Youtube videos of the event, there does not seem to be a full recording yet. The majority of the videos is music oriented. The event was two hours long and there was a sermon by an unknown pastor. It was about blind Bartimaeus. There are two snippets of the sermon on this Instagram posting (first and third video).

Beyond the simplistic and energetic preaching style (neither wrong per se), it is hard to tell if sin, repentance or Christ was clearly and accurately proclaimed. As the story of Apollos shows, zeal for truth must be accompanied by teaching the “way of God more accurately” (Acts 18:26).

I took some training from their organization a few years back when they came through Denver. It did not matter that I was a seasoned pastor trained and recognized by my denomination; I had to follow the Graham script by giving any potential converts the “My Commitment” pamphlet.

And I could not counsel them on my own or direct them to my church or another. All such converts would be followed up with directions to the nearest church, even Roman Catholic churches. And the pamphlet makes no mention of baptism.

Needless to say, I dropped out of the training.

So what is going on with Kanye West? Time will tell. But until then, let us be cautious and careful, realizing we do not know the whole story. But we do have a known history of the fruits Arminian, revivalistit, Billy Graham-esque, celebrity events. And it is not good.