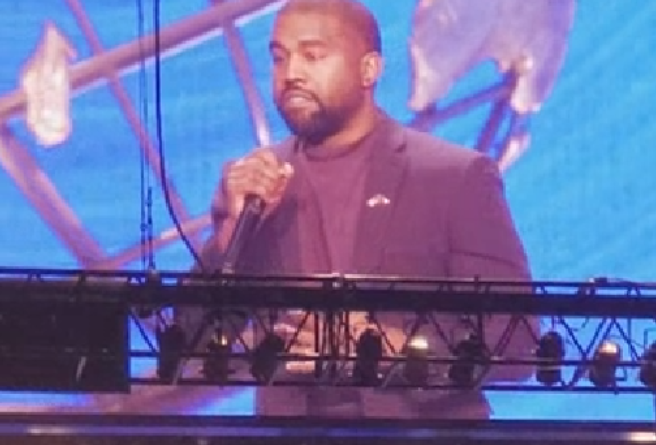 On Sunday, Kanye West defended Osteen.  Before a large, blue screen, emblazoned with the cover of his album, Osteen and West talked about his “transition” in the last year. With something closer to a free-flowing ramble, melding a promotional pitch with a typical self-aggrandizement spiel, Kanye talked for about twenty minutes before a cheering crowd at Lakewood church in Houston, Texas.

It will be interesting to see the reaction to this event. Many Christians were eager to embrace a man they knew little about. Some even questioned the sincerity and maturity of those who publicly voiced doubt about him. But how many of these same people will defend Osteen? Kanye West did.

“There’s a lot of people in the Christian community that try to give Joel a hard time, because when you turn on the radio he keeps on showing you how good God is.”

The crowd went wild. And Kanye continued to explain:

“God is not the enemy. God is not the negative part. God is not just a perception of fire and brimstone — God is love, is the greatest, is the glory. God is family, God is friendships, God is prosperity. Keep our eye on the sparrow. Keep your eye on the beauty and the love and the grace of God — the grace that allows us to be here today with all of our sins, that we know that when we accept Jesus Christ as our Lord and Savior, we will be granted eternal life.”

Osteen laughed, “When you’ve got Kanye defending you, you’ve made it, man.” And he has indeed made it. Many people like his message—a positive message of hope and prosperity, eschewing talk of hell, sin, guilt or repentance.  He even thinks there are “many paths to Jesus.”

Earlier in this public spectacle, Kanye claimed God had  been “calling him for a long time” and how he was “inspired” by “visions” from God. In an odd moment, he explained how this occurred during his mental breakdown a few years back.

It was at that same time he was interested in making a “Gospel album” but had no idea how to go about such a lofty goal. Then someone distracted him. He gently rebuked the man, explaining that his “streams of conscience” get easily distracted.  It is important for this stream to move in order to “let God flow through me as I speak…” He continued to explain that his “arrogance, confidence and cockiness” is now to be used for God.

Kanye also bemoaned that the Devil has all the talent and artists and producers, but that this “trend…is going to change” because Jesus has “won the victory.” So what does this mean in the here and now? He explains,

“Because now—that tells you about my arrogance and cockiness already—now the greatest artist that God…has ever created is now working for him.”

The crowd erupted in whistles, laughter and more clapping. I could detail the rest of his talk about addiction, repentance and the need to fear and love God, but they are miniscule parts without any lasting impact compared to his endorsement of Joel. And the talk ended with a stronger endorsement than he began with.

Kanye finished with a prayer, thanking the Lord for Osteen bringing “hundreds of thousands” of souls to God. I kid you not. You can listen here.

Sadly, you cannot listen to the public prayers of Apollos.  While not commended by God as the “greatest artist”, the Spirit describes him in more lofty terms: “eloquent…and mighty in the Scriptures.” And unlike Kanye, Apollos will be remembered in every age as Christians read of his bold speeches of the truth, fervency in spirit, and careful and accurate handling of the things of God (Acts 18:24-28).

Apollos spoke more accurately God’s truth than Joel or Kanye ever have. And yet he was humble enough to learn from Aquila and Priscilla the “way of God more accurately.” If the great Apollos needed correction, how much more Kanye? And it was then that Apollos became more mighty and useful in God’s kingdom by helping the saints and vigorously defending Jesus as the Christ.