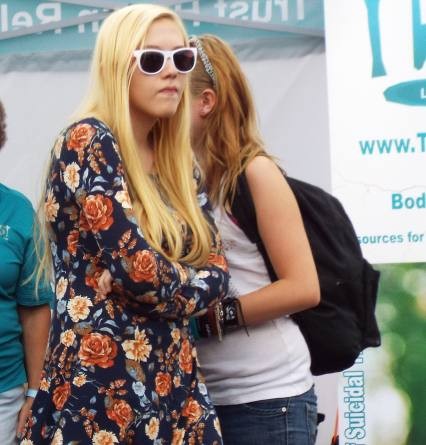 The table next to our booth was empty. The organization that had rented it out had left a few hours earlier. And then it rained.

The table was then no longer empty. It had two young girls—maybe sixteen—hiding from the rain, giggling and talking loudly. Even so, I  could not hear them over the din that was Heaven Fest—the Denver lollapalooza that had returned after a two year hiatus.

They initiated the conversation. I was busy winding down from a long day and handing out the last of the Day of Fasting against Abortion flyers.

“Whatch’ya got there?” she asked, her eyes squinting against the setting sun.

“Oh, here.” I stood up and handed them the flyer, explaining its contents in succinct fashion.

I was surprised.  Heaven Fest is an avowed Christian event after all, but I kept my composure.

“Ah. Well. You know Heaven Fest is a Christian event?” I naively responded.

Still grinning she replied, “Yes. I am a Christian.”

I knew such people existed. I read about them. And now I had one right in front of me.

The flyer I was handing out was not only against abortion only, but also for the repentance of “the millions of indifferent Americans who claim the name of Christ” and support abortion.

If she were a Christian, then some basic questions were in order. As her face was shaded by the pavilion, she fired off her answers:

Do you ever read the Bible? Yes. In fact, I believe in Jesus.
Who is Jesus then? I believe He is the Son of God.
What did Jesus do? I believe He saved me.

So I asked the next logical question:

What did Jesus save you from? Sin.

Like a chameleon, she blended into Heaven Fest as a conservative Christian who mouths all the right words.

Except that her faith-content was h0llow. And it popped like a balloon with my last question before the conversation ended by an intrusion from a festival worker:

She no longer had a quick-fire answer.

Pointing to her friend with a surprised look and a giggle, she asked her: “Do you know what sin is?”

She had no answer. She tried to switch topics. She hemmed and hawed and giggled…The rain stopped.

The table next to our booth was empty again. The organization that had rented it out had left a few hours earlier. And the two giggling girls were no longer there either.

If Christian means one who claims to follow Christ, then I had met a face of Christianity that I had never seen.  And my heart wept.

2 thoughts on “The face of today’s Christian?”