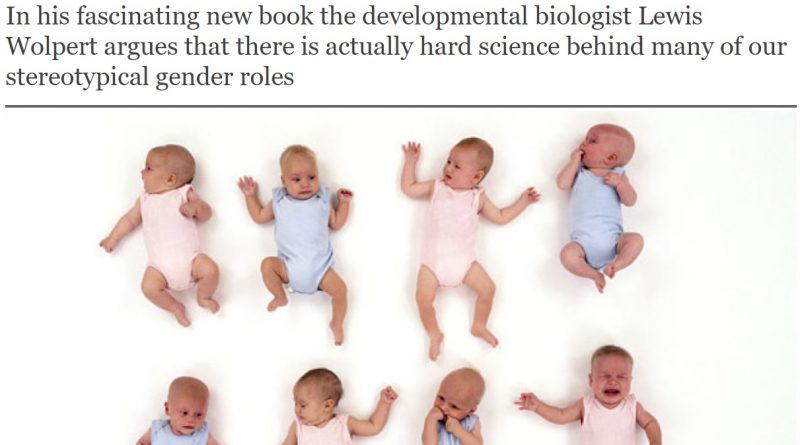 Here is a nice summary of the differences from a developmental biologist’s study.

“There are also fundamental differences in brain development between men and women, which are clear from the early behaviour of children. A few hours after birth, girls are more sensitive than boys to touch, and 40 hours after birth girls look longer at a face than boys, while boys look longer at a suspended mechanical mobile. At four months old, if babies are frightened in a strange room, twice as many girls as boys cry. Children’s play provides further evidence for genetic differences. At 12, 18 or 24 months, girls look at dolls much more than boys, while boys look at cars much more than girls. It is hard to attribute these basic differences at such young ages to purely social influences.”

“Women show their emotions more than men and are more facially expressive for both positive and negative feelings. A major difference between the emotions of men and women lies in the expression of aggression, for which men enjoy a pronounced physical advantage.”

“Significantly, boys born with an insensitivity to testosterone are worse at systemising, and girls born with CAH have enhanced systemising capability and lower empathy. Other emotional differences are that women generally report greater disgust than men, especially sexual disgust, and men engage in more risky behaviour. As regards humour, according to Prof Robert Provine, professor of psychology at the University of Maryland, Baltimore, “Females are the leading laughers, but males are the best laugh getters.””

“One nasty wisecrack is, “I haven’t spoken to my wife for three months. I don’t like to interrupt her.” But the evidence is that the overall difference between men and women with relation to language is usually small or close to zero. A scientific study found that women and men both spoke about 16,000 words per day.”

“A surprising finding is that distinctive words, syntax, colloquialisms, repetition and other features of written text can expose the gender of an author. An analysis of 14,000 text files from 70 separate studies found that, while men referred more to the properties of objects and impersonal topics, women used more words related to psychological and social topics. A study revealed numerous “psycholinguistic” factors in written material are gender-specific. A computer algorithm has been developed which can detect gender quite reliably from written texts.”