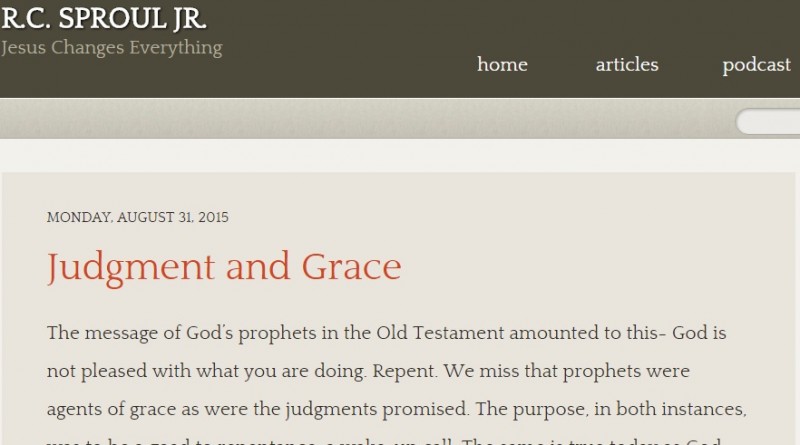 Typically, Presbyterians keep their opinion of pastors to themselves, unless the matter is serious enough to warrant public attention. Often that means something chargeable, which would mean bringing the charge to the governing body over the pastor, his Presbytery.

Which is to say that I am not attempting a trial of R. C. Sproul Jr. His Presbytery did that. And Ligonier as well.

At least, that was what I recently discovered at a Christian news site.

But he is a public figure and I can evaluate his public statement and his public actions.

Back in early October, I noted some concerns. There were questions I had about what happened and the confession offered by Sproul Jr.

For instance, consider the manner of the public confession. It was odd. Instead of a straight-forward “I broke the Seventh Commandment by signing up with Ashley Madison,” readers are given this:

“The message of God’s prophets in the Old Testament amounted to this- God is not pleased with what you are doing. Repent…”—with another six lines before he admits to sin.

Next, the admission is ensconced in questionable language: “in a moment of weakness, pain, and from an unhealthy curiosity.”

When publicly admitting sin, adding word such as “weakness,” “pain,” and the like are not helpful. They actually “poison the well” of the confession by attempting to predispose the reader toward sympathy. One’s weakness or pain is irrelevant to the sin and, therefore, to the confession of sin.

More importantly, another observation struck me: he never publicly confessed his sin of deception.

What do I mean by that? Twice he wrote about the Ashley Madison scandal and Josh Duggar in particular before he confessed his sin: Hacking Ashley Madison (July, 2015) and Ask R.C.: How Should We Respond to the Recent Scandal Regarding Josh Duggar? (August, 2015) [recall that Duggar was outed at Ashley Madison].

To his credit, he amended these articles with the following statement: “August 31, 2015 Update to This Article: in light of my public statement here, I believe I should have withheld comment on this matter.”

Certainly we all sin and so when we write or speak we could be accused of hypocrisy by a quick-minded audience. But in this case, Sproul Jr. specified the first article that he had never heard of Ashely Madison: “a website that I only recently learned about.”

He knew about it almost a year earlier. He should confess this lie.

And no one would know that he claimed ignorance of Ashley Madison unless they read that article. Being the research geek that I am, I discovered both articles shortly after the confession.

Why am I writing about this now? Because others have asked me to write about it. Because I discovered someone else recently writing about it. But not because I relish in “taking down” Sproul Jr.

He is a public figure like Bill Gothard and Doug Phillips. Yet his confessed sin is not on par with Doug’s sin. But the Phillips’ incident showed a strong propensity for American homeschooling Christians to fall under the siren call of the cult of personality.

So pointing out a glaring fault in Sproul’s confession is a reminder to pay attention to public figures. They influence people beyond the power of the ordinary pastor. Yet they should be held by the same standards as other pastors.

But even so,  we do not know all that is going on “behind the scenes.” Part of that is because we are not part his ministerial life nor an authority over him.  Because of that we ought to be careful in our discussions on the matter.

But this does not mean we have to be completely silent either. It is significant to note that Sproul’s (incomplete) confession was sufficient enough for Ligonier to reference it as reason for his ten-month suspension (although missing on this page).

But is a ten-month suspension enough? It is hard to determine but I believe Ephesians 5:3 gives a clue:  “But fornication and all [sexual] uncleanness or covetousness, let it not even be named among you, as is fitting for saints.” This is especially true for church officers (1 Tim. 3:7).

2 thoughts on “Some Thoughts on Sproul Jr.’s Public Confession”