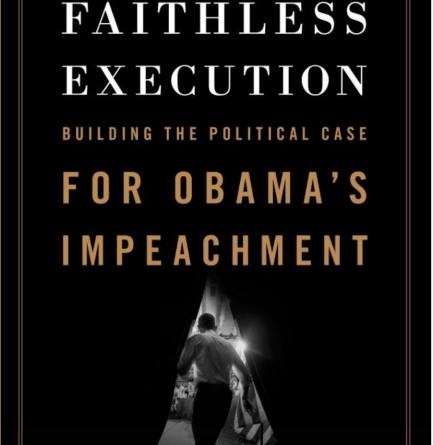 [Reprint from Aug. 5, 2014. With the new call by Mark Levin, Mccarthy’s book should be read by all interested parties]

Under normal social conditions, Andrew McCarthy’s newest book, Faithless Execution, would be earth-shattering. But these are no ordinary times in Obama’s America.

Many Democrats were quick to belittle the book before it was even sold, while the media essentially ignored it. And the Republican Establishment, as of this review, is still loudly denying any intent to impeach the president—preferring to dodge that responsibility by suing the president instead.

McCarthy agrees: the Republican leadership is lackluster at best. They have the power of the purse to help restrain the president and they will not use it. All they have left is impeachment. But, argues the author, the book is not calling for impeachment today. It is calling for the discussion to convince the public of impeachment.

A well-known and respected federal prosecutor, Andrew has written a book that all voters of any political persuasion should read. Why? Because he makes a non-emotional, objective and thorough case for impeaching President Obama. A case demanding to be analyzed by any intelligent American. And he is not a right-wing nut.

The book is divided into two parts: preliminary issues and articles of impeachment. The first part is not a diatribe against the president but a measured explanation of what the phrase high crimes and misdemeanors means. And that impeachment is virtually impossible in Obama’s America given the majority control by the Democrats, the cowardly refusal to discuss the issue by many Republicans (my words) and, more importantly, the simple fact that Americans are likely not interested.

But the first section is also an argument that what is needed now is a political effort to inform and persuade the public that the current abuses are serious. It is not enough to line up the legal facts of the case, the Republicans need to make a concerted and efficacious effort to build a case for the impeachment of President Obama.

The remainder of the book is formatted as formal articles of impeachment with documented evidence:

The book is a must read. It is an easy read. If we who take the constitutional rule of law seriously wish to live its principles then we must make the effort to lead the American public to just such a conclusion:

“The question is how convinced the public is that a president’s continued hold on power profoundly threatens their safety, prosperity, and sense of what kind of country we should be.”

This book is the first step in helping your neighbors come to the right conviction.