An interesting article was brought to my attention. The article, 4 Examples of Jesus Christ’s Libertarianism, made many surprising claims. And I want to focus on two of them:

For his first claim, the offered explanation of Luke 4 presents a curious view of the Devil: the governments of this world “belong to the devil. The state then, is a primary mechanism and means by which the devil can achieve his ends.”

His evidence offered is that Christ did not deny the claim of the Devil. Yet, in two of the other temptations, the Devil said “If you are the Son of God. . .”, and Christ never verbally corrected the Devil in those instances.

Does this mean that Jesus is conceding to the Devil’s insinuation that Christ may not be the Son of God? No. Silence is not the same thing as acq 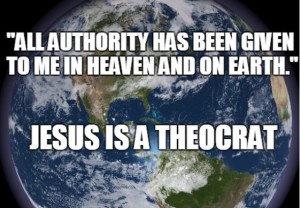 Further, Satan had already lied in the other temptations to Jesus. He lied by twisting Scripture. And Jesus refuted him with the truth each time. Lastly, the text names the Tempter, Devil, which is Greek for slanderer. Further proof that a perversion of truth is occurring.

The point of the temptations is to show that our Redeemer, as the Second Adam, overcame sin. That He is a Faithful High Priest who sympathizes with our infirmities (Heb. 4:15). It is not to show us Jesus’ views on government.

More importantly (and this point is crucial for Christians who put their trust in Christ’s power), Christ claims what the Devil only lied about:

“And Jesus came and spoke to them, saying, ‘All authority has been given to Me in heaven and on earth.’ ” (Matthew 28:18)

“Given to Me” does not mean that nations shall instantly become Christianized. It means He has power, authority and dominion over them as Lord.

Since Christ is God, this makes sense. Contending that Satan owns the governments does not make sense. But such a sentiment is understandable if the author means that they are under the influence of the Devil. But then so are many other things in this age.

The author interprets as follows:

“So what does Jesus do? He certainly doesn’t endorse obedience to the state. Rather, Jesus doesn’t answer the question…Jesus simply repeats the justice principle: give to people what they are due. Give to Caesar what is Caesar’s, and give to God what is God’s.”

But a closer look at the word “give” undermines this interpretation. This is an unfortunate translation of the Greek word that is better translated “give back.” Or as a scholarly dictionary states: “to give or do something in fulfilment of an obligation or expectation”  (Kittel, see also Strong).

Beyond this simple observation, it is completely unclear how the command to give to those the things that are due to them is not a command to obedience. Something is missing in the article—some hidden premise, some leap of logic, some redefinition of terms.

Now affirming obedience is not the same as saying that one is bound to pay taxes simply because  of the government’s say-so. No. Christians obey the government because we obey God. God is the basis of law, not government.

But this is a far cry from evidence that Christ did not “endorse obedience to the state.”

“Let every soul be subject to the governing authorities. For there is no authority except from God, and the authorities that exist are appointed by God.” (Romans 13:1)

A cursory view of Christ’s life and that of His followers shows by their actions and words that governments are to be obeyed—to the extent that such obedience does not mean disobedience to God (Acts 5:29).

This is a worthy discussion to have in the midst of an ever-growing American government. But the grounds of rejecting such an overbearing government lie elsewhere than in the verses offered by this article.

Jason’s response: On Government, Liberty, Satan, Christ, and ‘Render Unto Caesar’
My response: A follow-up friendly response to Jason Peirce: Romans 13 is clear

2 thoughts on “Is Jesus a libertarian? A friendly response to Jason Peirce”