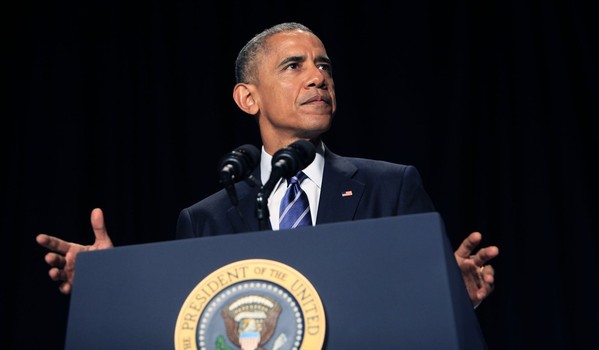 (From Examiner.com in February of this year. Still relevant):

“But part of what I want to touch on today is the degree to which we’ve seen professions of faith used both as an instrument of great good, but also twisted and misused in the name of evil.” Obama, 2015 Prayer Breakfast

There is much that is formally true in Obama’s talk at the recent annual Prayer Breakfast. People of faith do great things and people of faith do bad things. The Crusades did happen and slavery was justified in the name of religion.

But what is the president’s faith? What is the religion behind his talk? These are important questions because many Americans are convinced that he is a Christian like them. And if conservatives want to convince more Americans of the deep-seated problems with liberalism’s program, there is no better place to start than with the self-described progressive, Barack Obama.

“But Hunter, the president’s closest spiritual counselor, says Obama has technically been a born-again Christian for more than 25 years, since accepting Jesus at Wright’s Chicago church in the 1980s.” (CNN)

The 2012 CNN article helped perpetuate the image of the president as a typical American who loves God. Unfortunately, it was a shallow article that did not include the president’s own words. But we do not have to go far to find out his religious and cultural views because, he graciously offered them in advance with his 2006 book, The Audacity of Hope.

He is full of uncertainty, which comes across to the unsuspecting mind as humility:

“…I can’t summarily dismiss those possessed of similar certainty today—the antiabortion activist who pickets my town hall meeting, or the animal rights activist who raids a laboratory—no matter how deeply I disagree with their views. I am robbed even of the certainty of uncertainty—for sometimes absolute truths may well be absolute” (p.97, Audacity).

Perhaps this is why he has a hard time explicitly naming terrorist acts as terrorism. But the type of uncertainty Obama expresses has other serious cultural and political ramifications:

“Implicit in [the Constitution] structure, in the very idea of ordered liberty, was a rejection of absolute truth, the infallibility of any idea or ideology or theology or ‘ism,’ any tyrannical consistency that might lock future generations into a single, unalterable course…” (p. 93, cp. p.90).

Is it surprising to see his administration at the vanguard of “fundamentally transforming” American culture and jurisprudence? If life is full of uncertainty, then all is in moral flux and the flux can only be controlled by those who make the rules.

He is even robbed of the infallible certainty of the rightness of abortion (p.223). And his view of the bible and Christianity is uncertain and influx as well:

“When I read the Bible, I do so with the belief that it is not a static text but the living Word and that I must be continually open to new revelations—whether they come from a lesbian friend or a doctor opposed to abortion” (p.224).

And people think only the conservatives mix religion and politics. Obama has been doing that since the 1980s. He was just more subtle about it.

But as erratic as a life deeply seated in uncertainty can be, it never is truly uncertainty. Absolute uncertainty about everything is an impossibility:

“This is not to say that I’m unanchored in my faith. There are some things that I’m absolutely sure about—the Golden Rule, the need to battle cruelty in all its forms, the value of love and charity, humility and grace” (p.224).

Again, before his election in 2008, he told the world that religion can play with politics, but only according to the rules of politics:

“What our deliberative, pluralistic democracy does demand is that the religiously motivated translate their concerns into universal, rather than religion-specific, values…some principle that is accessible to peoples of all faiths, including those with no faith at all” (p.219).

And that is what his public speeches are: expressions of his religious faith in the language of the universal (political) claims of progressivism. This makes sense since his conversion came in the wake of an epiphany:

“It was because of these newfound understandings—that religious commitment did not require me to suspend critical thinking, disengage from the battle for economic and social justice, or otherwise retreat from the world that I knew and loved—that I was finally able to walk down the aisle of Trinity United Church of Christ one day and be baptized” (p.208)

He could be a good progressivist while using religion-speak. So his talk at the prayer breakfast is the universal claims of progressivism translated into religion-specific values.

However, this translation of religious values into universal (political) language is not fully convertible:

“When science teachers insist on keeping creationism or intelligent design out of their classrooms, they are not asserting that scientific knowledge is superior to religious insight. They are simply insisting that each path to knowledge involves different rules and that those rules are not interchangeable” (emphasis added, p.219).

Thus, religious truth gets lost in political translation. Obama has not progressed far beyond the Kantian dualism of the 19th century. Political liberals can still feel religious while the latest scientific fad becomes truth that drives the political engine of progressivism. And religious conservatives must stay silent in the political arena because their religious-specific values (such as creationism) cannot be translated into universal (scientific-political) language.

All this talk by Obama is just a round-about way to justify his unbiblical beliefs. He is still certain in progressivism’s truth-claims, even as he mouths words of uncertainty. But many Americans do not know that. They only hear his religious-speak. Yet his own words may still be used against the religion he represents.