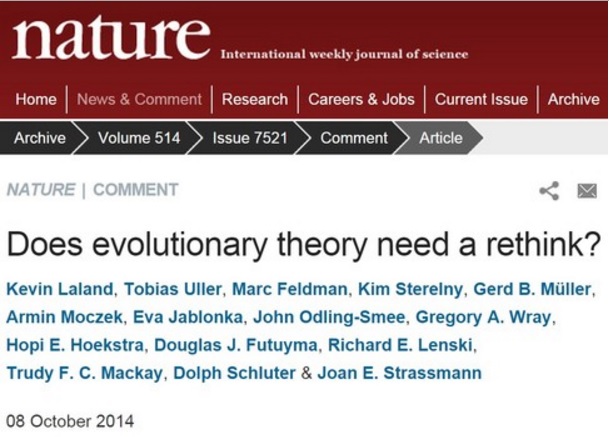 A few weeks ago, according to Creation-Evolution Headlines (CEH), in the latest edition of Nature, two scientists debated on whether Darwin’s mechanism is correct. The article, “Does evolutionary theory need a re-think?”, is surprising in its frankness and significant in its publication, especially in an age of increasing defection by Christians to the cause of evolution.

The scientists who answered in the affirmative (“yes, urgently”) declared:

“This is no storm in an academic tearoom, it is a struggle for the very soul of the discipline.”

The fact that this question, whether mutation and natural selection can explain diversity of life, was debated demonstrates what the media has hidden for years: evolutionary theory has serious doubts about itself.

CEH reported that those in favor of jettisoning the standard view were part of a group of scientist who continue to call into question the “core values of Darwinian theory” (known as Altenberg 16).

Those in favor of retaining the standard view (the “No, all is well” group) simply believe it is flexible enough to allow various other theories. But other scientist chimed in to the debate in the comment section.

One in particular, Joan Roughgarden, a professor of biology at Stanford University, gave her learned opinion:

“The ‘No, All is Well’ group speaks confidently of their field as ‘vibrantly creative and rapidly growing in scope’. Instead, I see progressive decline in the importance of evolutionary biology…Today, evolution is an embattled subject whereas ecology along with its stepchild of conservation biology flourish.”

Naturally, both sides of this internal debate still hung tenaciously to the general theory of evolution. New evidence, creating more questions than answers according to CEH, continues to plague evolutionary theory. Hopefully, one day the evolving theory of evolution will catch up with the facts.