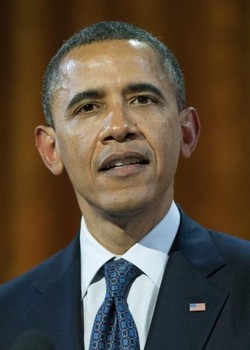 Barack Obama is the first U.S. President to publicly endorse homosexual marriage. The Denver Postreported about Obama’s interview with ABC News where he made his views public.

In an unsurprising move, America’s figurehead and world-leader told ABC News that “I think same sex couples should be able to get married.” Given his administration’s concerted effort to ignore the Defense Against Marriage Act and overthrow the military Don’t Ask, Don’t Tell policy, it is still an historical moment that will live in infamy.

In a move that will certainly bolster the effort of Colorado Governor Hickenlooper, the President has given public weight behind the views of many Colorado Democrats. The Colorado Governorcalled for a special session (at cost to taxpayers) that would, among other issues, include the recent homosexual “civil unions bill”.

The President’s frank statements come a day after North Carolina passed a constitutional amendment defending the historical definition of marriage. Although the President admitted this was a “local level” debate, he has now nationalized the issue.

The President’s rationale for same-sex marriage was an “evolution”—an apt term for the moral relativism of too many Americans, especially political Democrats. If biological evolution—change—is a basis for moral decisions, then what is wrong in one generation could be right in another.

Naturally, liberal-leaning organizations, such as the Denver Post, already have public praise for the President’s shameless endorsement. Their editorial piece claimed “it was the right position to take on this civil rights issue.”

With a man of influence such as the President of the United States endorsing such unnatural relationships, one important political question remains for liberals uncomfortable with such marriages: will their desire to maintain the liberal status quo override their distaste of homosexual marriage?