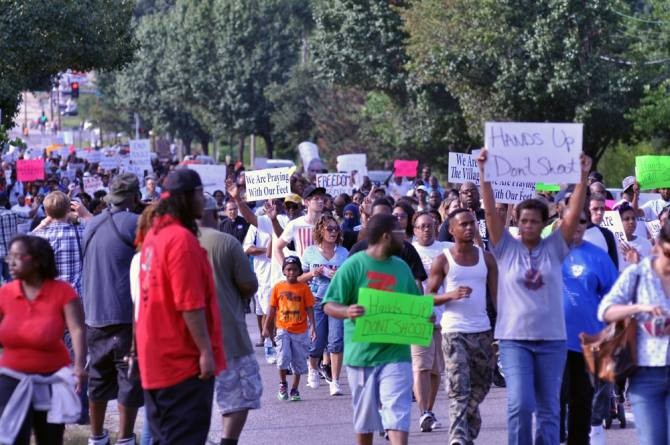 [Reprint from Examiner.com, December 31, 2014 as “Ferguson, New York and the culture of suspicion”]

Thus spoke Bishop Dudley while interviewed on the O’Reilly show a few weeks before the final verdict in the Brown shooting.

Anger, frustration and chaos boiled over the city of Ferguson for days. Then there were the sympathizing protests across the country, only to break out into more trouble with the death of Garner.

Now, with the assassination of two New York police officers because of (among other reasons) the Ferguson shooting, this makes understanding the causes of the reactions to Ferguson more important.

Bishop Dudley may have given us an important answer: suspicion. He is suspicious of the police’s interpretation (or presentation) of the facts.

This surprisingly open and frank answer from one of two black pastors near Ferguson is a brilliant moment of clarity in a sea of cultural chaos that is the wake of the Ferguson shooting.  The Bishop was responding to a question given directly to a Rev. Scott on the Bill O’Reilly show a month ago:

O’Reilly: “Now, I am going to ask you the same question, Reverend Scott, if it comes out that forensics says ‘Mr. Brown attacked the officer’ and eight African-American witnesses back it up…will you Rev. Scott accept that there might not be an indictment?”

Rev. Scott: “It is not a matter of whether I will or will not accept if there is going to be an indictment or not…And here is the thing I think that you fail to understand Mr. O’Reilly. The issue is: who interprets the data, who interprets the forensic evidence. And when you look at what has taken place as far as the forensic evidence and the autopsies are concerned, this [leaked fact] is nothing new. So in that particular vein, I think that it is very important for us to understand that the interpretation, of whoever decides to interpret the data, they are the ones that basically writes the script.”

I certainly do not know how widespread this reasoning is in America, but these answers are illustrative of a nation divided by mutual suspicion.

Too many peoples and groups are suspicion of each other. From political liberals to libertarians, rich, poor and various minorities, many are suspicious of each other, whether for good or ill.

But whence the source of these suspicions?

There are certainly many valid reasons to be suspicious: there is racism, there is corruption, there is injustice in America.

Politically and culturally, the causes run deeper: we are a divided nation. The last fifty years is a history of growing division along many cultural and political fault lines in America. It suggests that one nation under God is really many cultures under many gods. And that is the breeding ground of mutual suspicion.

They cannot. And that is only natural. As the old adage states, birds of a feather flock together.

Unfortunately, many people on many sides of many issues are unaware of this. They think—classical liberals, libertarians, conservatives and the like—we can all agree to get along whenever one of the opposition is in power. And that, somehow, we can stay America regardless of our view of murder, marriage and freedom.

But we cannot. It is naïve to think that laws and political parties and sound-byte arguments can keep a divided culture together. At this rate, America is only staying America because of an enforced top-down approach to cultural unity. And that just compounds the problem.

If America wishes to overcome the suspicions that are growing, it will require enough people to agree upon basic issues such as the definition of life, marriage and freedom.

At one time we did: that was when we called ourselves a Christian nation. We are no longer such a nation. We are quickly mutating into a version of scientific paganism: science (technology) is the glue that holds together disparate cultural gods such as liberalism, materialism and socialism.

For America to move forward and at least begin to deal with the kind of suspicion and skepticism portrayed by these pastors, we have to at least acknowledge that such fundamental divisions are significant.

But for the Christian, his hope is not in a unified America. He recognizes that the fundamental problem is sin. And the fundamental solution is the Gospel. And so we wait for Christ’s Return to wipe away all suspicion, skepticism and doubt.

2 thoughts on “Ferguson anniversary and the culture of suspicion”