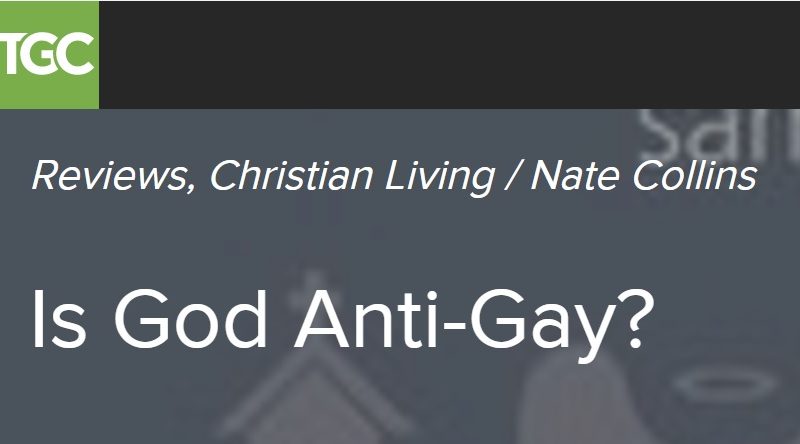 For all of Christendom’s history, the answer to the question of “Is God anti-gay?” has emphatically been yes.

So when the book Is God Anti-Gay? And other questions about homosexuality came out almost 10 years ago, one would assume the answer is still emphatically yes. After all, the author is a minster in the Church of England which from its inception denounced homosexuality.

But his answer is far from yes. This is what he writes.

“Is God anti-gay? No. But he is against who all of us are by nature, as those living apart from him and for ourselves. He’s anti that guy, He’s anti that guy, whatever that guys looks like in each of our lives. But because he is bigger than us, better than us, and able to do these things in ways we would struggle to, God loves that guy too. Loves him enough to carry his burden, take his place, clean him up, make him whole, and unite him forever to himself [emphasis original].”

This is quite bewildering. Why cannot the author answer yes to that simple question? Instead, we get an emphatic no, and then we get a long-winded, unhelpful explanation.

Think about it. He writes that God is “anti that guy.” God is anti-something, it seems. So why is He not anti-gay? Could not that something be gay? “No,” we are told, “God is not anti-gay.”

But God is anti-gay. He is also anti-adultery. And anti-anything and anyone else in violation of his law. How can a minister write otherwise?

Well, a minister did. That minister is the author of this book and his name is Sam Allberry.

Sam is the co-founder of the celibate, gay parachurch, Living Out. He lectures for Ravi Zacharius Ministries. He is also an editor at The Gospel Coalition. His book is sold at seminaries such as Westminster. It was published in 2013, five years before Revoice.

If we ignore the confusing answer and continue, readers will just encounter an unremarkable book. The only thing that stands out is the number of well-known names who endorsed the book (click “see more endorsements” several times at bottom of the product page).

This book includes a defense of the biblical prohibition of homosexual acts, friendly advice for interacting with gays and answers to various questions.

But that wrong answer cannot be ignored. It cannot be glossed over. This way of answering the question colors the whole book. We see this in a few ways—some obvious and some less obvious.

One obvious way is in downplaying the sinfulness of homosexuality. This is done by the tone and language of the book. For example, he insists that homosexuality can never be the sin of the age: “So we must never imply that homosexuality is the sin of our age. If we are to be faithful to Scripture, we must also preach against theft, greed, drunkenness, reviling, and defrauding others…” [emphasis added].

Never is a strong word. I may not think homosexuality is the sin of the age, but I could see why someone else might. Also suggesting that a sermon cannot only be about homosexuality is not pastoral, just read Romans 1.

In the section “What Should We Do if a Gay Couple Starts Coming to Our Church?”, we find another obvious consequence of Sam’s answer. He wants to woo haters of God with the Good News.

“This is what I most want people to know–for them to be bowled over by the God of the cross and resurrection…So when a gay couple  starts coming to church, my priority for them is the same as for anyone else: to hear the gospel and experience the welcome of a Christian community.”

Then, after he draws them into the Gospel, he will teach them to “give over” their sexuality. “And, once gripped by this, to help them think through what trusting in this God wilI involve—what will need to be given over to him, including our messed-up sexuality.”

This whole approach is wrong-headed. Traditional Protestant evangelism has always brought the law to bear upon the conscience of the hearers, doing so in a straightforward manner. Why? To wake unbelievers up.

But even here, the implications of God not being against homosexuality are not fully realized. It is not enough to mention the law last and the Gospel first. We are told we must befriend gays even before we bring the Good News.

He states this explicitly in the section “What is the best way to share Christ with a homosexual friend?”

“Because of the expectation gay friends will have about how Christians will respond to them, we need to make every effort to let them know that we are for them and not against them. This will at least involve taking time to get to know them well and listening carefully to their story. We need to love them more than their gay friends do, and we need to love them more than they love their homosexuality (as the Christian leader Al Mohler has put it). Only then can we begin to point to the greater love that God has for them” (emphasis added).

Wow. That’s a tall order. Before we get to the law or even the Gospel, we have to be their closest ally and friend. Think about it. Imagine arguing the same way for sex-traffickers or wife-beaters?

This brings us to the less obvious problem with the book: omissions on the dangers of the gay life.

Picture writing a book about drunkenness with the drunk described as a casual drinker. This leaves the average reader unprepared to deal with real-world drunks, which is exactly what many celibate gay writers and speakers have done.

Homosexuals are not just straights who desire the wrong person. They are sexually compulsive. Their sexual drive is out of control. We see this in their number of sexual partners, number of anonymous sex encounters, number of simultaneous partners, unsafe sex and use of pornography.

With the #MeToo movement and concern over heterosexual predators, it makes no sense to ignore potential danger from homosexuals. The Roman Catholic church scandals are evidence of that.

Homosexuals are also miserable with frequent occurrences of depression and various addictions. Many have STDs, various medical problems and are suicidal.

The odds are that a gay person invited to church will have problems the typical church cannot handle—especially with parishioners left in the dark about such dangers.

These omissions are serious, even dangerous. But so is the omission to call same-sex attraction a sin. In the celibate gay world, the common view is that attraction to the same sex is not the same as desire. Rather, it is non-volitional, or passive.

Because of that, many believe same-sex attraction is part of who they are and therefore cannot change. This explains why there is no call to mortify it in this book. He warns against the outward fruits but says little about inward roots.

This may be no accident since Allberry seemingly does not believe God is anti-gay. Such a belief brings into doubt the sinfulness of same-sex attraction. He says as much in an interview.

“I am not comfortable with the language that says same-sex attraction itself is sin…I think if you say to someone that their same-sex attraction itself is sin you are effectively saying you need to repent of being fallen. And I am not quite sure what that means or what that looks like. And I certainly think that goes further than the bible does…”(ERLC interview, here.)

This explains why in one part of the book he likens homosexual feelings to suffering: something happening to them as a result of the fall. It is a passive description. It also explains why he insists elsewhere that Christians assure their unsaved gay friends that they will never be rejected by them.

In spite of these glaring problems, can this book be useful? Yes, to the extent that he eschews the act of sodomy. But that is about the extent of it.

People all over the West are looking for answers to questions about sexuality. Even many in the church struggle with the right answers. Thus, it is imperative the church’s ministers should be correct and clear in their answers. Sadly, this book and its author give the wrong answer to an easy question.